Tell the World is a feature length film that gives an overview of the main events leading to the development of the Seventh-day Adventist Church.  Additional HISTORY.

Its birthplace in the township of Washington, New Hampshire, in 1844, reveals three central truths about the history of the Seventh-day Adventist Church.

THE CHRISTIAN ROOTS OF SEVENTH-DAY ADVENTISM

The local church where “Christian,” “Advent,” and “Sabbath” combined was established by Christian Connection believers, a religious body that in the mid-nineteenth century was fifth in membership within the United States.

Members of the Christian movement sought biblical authority for every aspect of belief. They wanted “no creed but the Bible.” Thus, if they were convinced from the Scriptures of the literal soon advent of Christ and the continuing validity of the seventh day Sabbath, their heritage demanded acceptance. 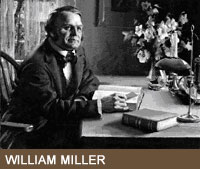 Because William Miller, a well-known Baptist preacher, exhibited profound knowledge of the Scriptures as he lectured upon the literal soon advent of Christ, scores of Christian Connection churches and many of its ministers and leaders became “Adventist” in the late 1830s and 1840s. The Washington, New Hampshire, Christian Connection church by the early 1840s was an “Adventist” church.

Washington, New Hampshire, was the initial town in the United States to name itself after George Washington, and it took that name in 1776, the year of the American Revolution. Its very birthplace seemed a call to personal freedom.

“Christians,” as did Seventh-day Adventists from their earliest days, actively sought freedom for all and worked toward abolition of slavery as well as roles for women in the church, and fostered a strong opposition to formalized church creeds. 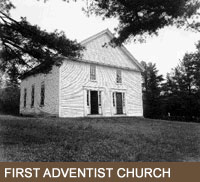 Freedom was also emphasized through an orientation toward temperance and health reform. Proper care of the physical frame would yield a clear mind with which to perceive scriptural truths.

Thus within nineteenth-century Adventism one finds strong anti-slavery actions, women licensed as ministers, and health reform principles that included abolition of alcohol and tobacco within the membership.

Religious freedom came to mean more than the separation of church and state. It also implied a right to read the Scripture for oneself and come to conclusions not bound by creedal presuppositions. The “present truth” perspective assumed that new insights would arise as Seventh-day Adventists continued to study the Scriptures. The prophetic guidance of Ellen White within the movement solidified this perspective of social, organizational, and theological freedom.

The Washington, New Hampshire, roots also illustrate the diversity within the heritage of Seventh-day Adventists. It was Rachel Oakes, a Seventh Day Baptist, that convinced some of the members of the Washington church about the continuing validity of the seventh-day Sabbath. Not all mid-nineteenth century churches would give a fair hearing to the insights of a woman. Besides that, Thomas Preble, who attended that church and wrote an influential tract on the seventh-day Sabbath, was a Freewill Baptist. Frederick Wheeler, who served as their pastor, was a Methodist minister. We thus have substantial diversity within that original church. At least five different religious faiths formed the first Sabbath keeping Christian Adventist church. Within that diversity, however, unity over central issues prevailed.

Shortly after settling on a denominational name in 1860, Seventh-day Adventists began to talk about a worldwide movement. After all, didn’t Christ urge to “go ye into all the world, and preach the gospel to every creature” and didn’t Revelation talk of “the everlasting gospel” to be proclaimed to “them that dwell on the earth, and to every nation, and kindred, and tongue, and people”? In 1861 it was discovered that at least five in Ireland were practicing Seventh-day 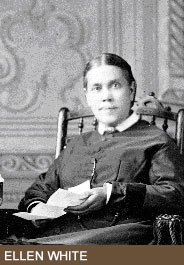 Adventists. But how could a group of only a few thousand perform the task of worldwide evangelism? The denomination was officially organized on May 21, 1863, when the movement included some 125 churches and 3,500 members. By 1864 Michael Belina Czechowski, a former Catholic priest, decided to spread the Seventh-day Adventist message throughout Europe. In 1874 the church was ready to send abroad its first official missionary, J. N. Andrews, who left the United States for Switzerland. By the end of the century Seventh-day Adventism had become worldwide in scope.

Today some 10 million Seventh-day Adventists have established themselves in virtually every country of the world. Less than 10 percent of Seventh-day Adventists live in the United States. While ethnically diverse, they remain united over the everlasting gospel, the basic Christian message of salvation through faith in Christ. Unity prevails also over the other central teachings of their Christian heritage.

While Seventh-day Adventists arose within an apocalyptic movement that stressed the nearness of the Second Advent, their “Christian” heritage emphasized the down-to-earth implications of the ministry of the Saviour. The tension between “today” and “later” gives a unique power to the way Adventists serve in their communities. It has focused the energies of church members into education, publishing, the healing arts, community service, and any other activities that allow them to talk about their faith while improving the lives of their neighbors.

One result of this desire to touch lives for God is that Adventists have built thousands of schools around the world. It also means that Seventh-day Adventist physicians and medical institutions serve individual needs in more than 98 countries, giving the highest possible quality of personal care whenever people hurt. These physicians, nurses, therapists, and other medical workers have dedicated their lives to providing physical healing so that each person can live the best possible life. Using modern medical knowledge and carefully developed skills, these workers touch thousands of lives each day, bringing healing and hope into families around the world.

Schools, hospitals, clinics, and health food factories are just one small corner of the Seventh-day Adventist commitment to improving lives. There is much more:

The mission of the Seventh-day Adventist Church , as articulated in the church’s mission statement, is to proclaim to all people the everlasting gospel in the context of the Three Angels’ messages of Revelation 14:6-12. The commission of Jesus Christ compels us to lead others to accept Jesus as their personal savior and to unite with His church, and nurture them in preparation for His soon return. That’s at the heart of the church’s mission and is accomplished through preaching, teaching, and healing ministries.

From its inception, the church was intentional to articulate and practice its mission by communicating the message of the gospel throughout the world. The term “global mission” is synonymous with reaching the peoples of the world no matter where they are, and in the context of their lives. Adventists are a global community. Adventists are committed to making education accessible everywhere. At the heart of the Adventist education system is the conviction that every individual should have the opportunity to study and grow.